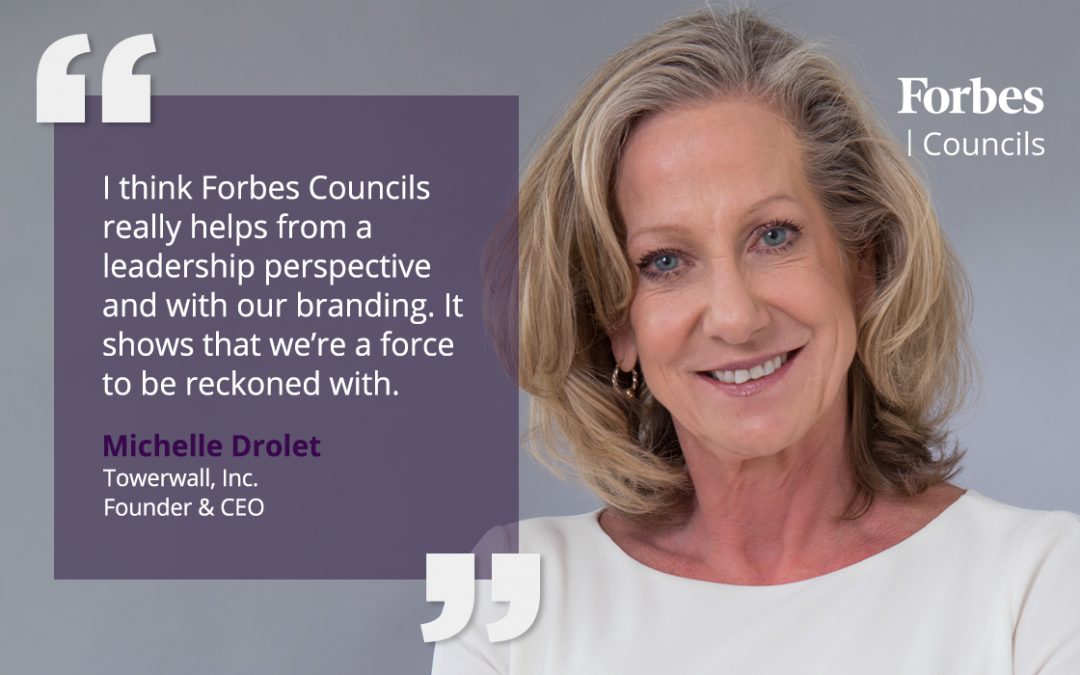 It was always Michelle Drolet’s intention to pursue a career that kept the world safe from “the bad guys.” She studied criminal justice and political science and hoped to land a job at the FBI after graduation. While that plan didn’t pan out, 32 years later Drolet is nonetheless still thwarting the bad guys. “I didn’t think I would ever be in information security,” she says. “But doors close and doors open.” As CEO of Towerwall, she helps companies protect their data through the adoption of effective cybersecurity practices that effectively close the door to nefarious elements.

“Information security is certainly not one size fits all,” she says. “We help our customers understand where their weaknesses and vulnerabilities are by looking at their systems and then building actionable plans and remediation roadmaps.”  She says that when she first started out in the industry in the early 90s, customers often thought that a firewall was an actual brick wall. The information security landscape has changed dramatically since then.

“When we were first getting started, the bad guys wanted to bring down organizations for notoriety,” says Drolet. “Now, they don’t want to be known. They’ll sit in somebody’s network for, on average, 208 days and just gather and exfiltrate information. Before it was like one guy in his basement. Now it’s big business and these hackers have nine to five jobs. It’s terrifying.”

One of the biggest challenges that Drolet faces is that many companies still don’t understand the importance of cybersecurity. “There are still a lot of organizations that say, ‘I don’t have anything that anyone wants.’ Until something bad happens to them, they don’t see the light.” But if a company has bandwidth and a customer list, that’s enough to potentially attract the interest of a hacker. “Many years ago, we had a customer whose systems were slowing down and we went in and did an assessment and found that somebody from France had installed and was running a pornographic site on his servers and he was hosting it.”

Drolet has an unusual entrepreneurial history. She helped her company’s original founder to scale the organization with the goal of selling it. Back then, in the mid-90s, it was a software distribution company called CDG, and while the company was indeed sold, Drolet decided to buy it back in 1999. “Once you’re an entrepreneur, it’s difficult to work for somebody else. [The new owners] were awesome and great to work with, but I really knew that we could take the organization in a different direction with the right set of people.” That’s when she shifted the company’s focus to cybersecurity and renamed it Towerwall. The company now works in a variety of industries such as biotherapeutics, healthcare, financial services, and retail. While the bulk of her customers have been in New England, Drolet says that, over the past two years, she’s made a conscious decision to grow into other geographic regions, including further south on the East Coast and into the Midwest and the Caribbean.

“Working with Forbes Technology Council is part of that strategy,” she says. “We haven’t really changed as an organization, but we’re making a more national appearance, and we’re really excited about that,” she says. “We are ready to expand with the right people and the right processes. We talk about transformation and automation to our customers, and now we’re doing it for ourselves.”

“Getting our message out to the masses is challenging,” says Drolet. “I think Forbes Councils really helps from a leadership perspective and with our branding. It shows that we’re a force to be reckoned with and that we have amazing customers.” Drolet uses the Forbes Councils platform to share thought leadership on information security topics that customers, prospective clients, and readers in general, need to “be protected from the bad guys.” One prospect, she says, reached out to her because he was looking for information on a security topic and found a Forbes Councils article by her on the subject. “He said, ‘I couldn’t find a lot of information, and your article really helped, and that’s why I reached out.’” Forbes Councils, Drolet says, gives Towerwall increased visibility and allows her to showcase “what we do for our customers, our knowledge base, and our human capital.”